My friends Erin and Wendy joined me in Georgia in mid-October for nine days of travel, adventure, and more food than most people consume in a month. After a quick two-day sojourn to Yerevan, Armenia (which I found less charming than Tbilisi but with a more varied and colorful fresh food market), we passed back into south Georgia and met our guide for the next week, Sofia. 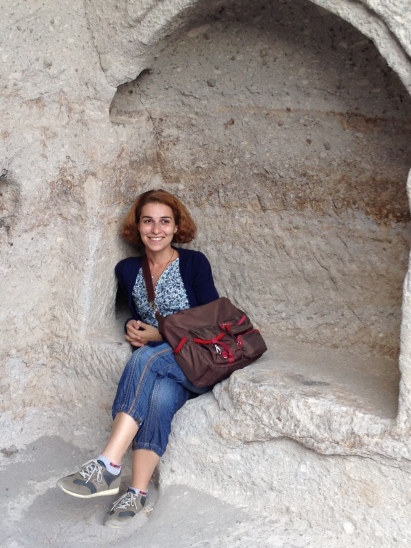 Sofia is about my age, and her eyes sparkle with a playful mischief that endeared her to me almost immediately. As we travel along bumpy dirt roads towards the caves of Vardzia, she regales us with tales of Georgia’s Golden Age in the 12th century as if she lived it herself. Her command of dates, place names, and other facts about her country is encyclopedic but never boring. Sometimes she brings us back to the present with funny anecdotes from her real life, like the time she was assigned to memorize portions of Shota Rustaveli’s 12th century epic poem, “Knight in a Panther’s Skin” (as all Georgian school children must do). “I used to put the book in the refrigerator,” she tells us, “to punish it.”

Back when Rustaveli was writing his poem, while the rest of Georgia was enjoying its golden age under badass Queen Tamar, the area we’re driving through was constantly being invaded by bands of fearsome Turks. The land bouncing by out the window is stark, rocky, and wind-blown—unlike remote Svaneti with its watchtowers and saw-tooth peaks, Meskheti (the name for this region) would be tough to defend. It’s the kind of place you grow potatoes, not wage guerilla warfare. (Indeed, the best potatoes in Georgia are in fact grown here.)

The local people devised all sorts of ways to protect themselves, including hollowing out more than 400 rooms spanning 13 stories inside of a cliff. I can only imagine how painstaking and exhausting this work must have been. Yet they continued to chisel away for some 50 years. At its height, 50,000 people called the Vardzia cave complex home.

Alas, an earthquake in 1283 shook loose the outer wall of the cliff into which these caves were built, revealing them to the valley below like a natural dollhouse. Today the site draws tourists like us but is also a working monastery, where a handful of monks still live among the caves and tend the small church hollowed out of the rock.

After an al fresco lunch (including potatoes, yes, and whole smoked trout), we headed up the cliff to scamper among the caves ourselves. Sofia pointed out depressions in the floor of certain rooms that would have served as ovens for baking bread, and hollows in others where they would have buried the qvevris (clay amphora) in which they fermented wine. The beds, I’ll admit, didn’t look very comfortable, but the view? Stunning.

One thought on “A Cooking Journey through Georgia: Vardzia”