Leaving the rocky moors of Samtskhe-Javakheti behind, Wendy, Erin, and I traveled up through the central Kartli region near Tbilisi and into the rolling hills of Kakheti, Georgia’s wine country in the east.

If you’re reading this blog, you might already know that Georgia boasts one of the world’s oldest wine-making traditions: people have been fermenting grapes into wine here for nearly 8,000 years. The country is home to 525 (!) native grape varietals that most of us in the US have never heard of. They’ve got colorful names like usakhelouri, “the nameless,” and kindzmarauli, “cilantro vinegar” (which must have been a ruse to deter someone from stealing the grapes, because these grapes produce a delicious blood-red semi-sweet wine that tastes nothing like either of its namesakes). During the Soviet period, Georgia supplied most of the wine for the entire USSR, and quantity took precedence over quality.

Today, things are changing. When Russia placed an embargo on the importation of Georgian wine in 2006, Georgia’s winemakers had to reorient their production for other markets. (Until then, Russia had been purchasing approximately 80% of all the wine Georgia exported.) Wineries revamped their standards to make their wines eligible for sale in Europe, and an increasing number of small producers saw the potential for marketing natural wines fermented in the classic Georgian style, which differs in a few key ways from the wines most Americans and Europeans are used to drinking.

Our driver Beso takes a break next to a full-size kvevri in Kakheti.

First of all, Georgian wines are traditionally fermented in huge terracotta vessels called kvevris rather than in oak barrels or stainless steel tanks. The kvevri is coated with lime outside and lined with beeswax inside to seal the clay, then buried underground where the temperature remains constant. Winemakers who produce “natural wines” don’t spray their grapes with pesticides, rely on the “ambient” yeast present on the grape skins and in the air to generate fermentation rather than adding cultured yeasts, and typically do not add sulfites (which are used as a preservative in most Western wines).

In Georgia, white grapes have traditionally been fermented along with their skins, seeds, and stems (the “pomace”) just like red grapes, whereas European and American vintners ferment white grape juice all by itself. This practice gives some Georgian whites an amber or orange color (from the skin contact) and a tannic, highly savory quality, which allows them to stand up to the bolder flavors most of us would typically pair with red wine, like grilled meat.

Iago Bitarishvili is one of the vintners making internationally renowned kvevri wine in Georgia today. Wendy and I had tasted his delicate 2010 chinuri (which takes its name from a native Georgian white grape) at Oda House in New York a couple of years ago and were thrilled to have the chance to visit his marani (the Georgian term for a place where wine Is made) in Chardakhi, a village about 30 kilometers outside Tbilisi.

Iago Bitarishvili explains the process of fermentation at his marani in Chardakhi, Kartli region, Georgia

Iago is a trim man with kind eyes and a dimpled smile. His easy speech (elegant English) and measured movements seemed to reflect an inner calm that set me right at ease. We had hoped to catch the grape harvest (rtveli) in action, but 2014 was a hot year so the grapes had ripened early, he explained. He walked us through the stages of fermentation while stirring the grapes in one of his open kvevris:

The kvevri is covered with mesh during the first stage of fermentation to keep bugs out and let Co2 escape. The kvevris in the background are decorative and not representative of the size of those buried. 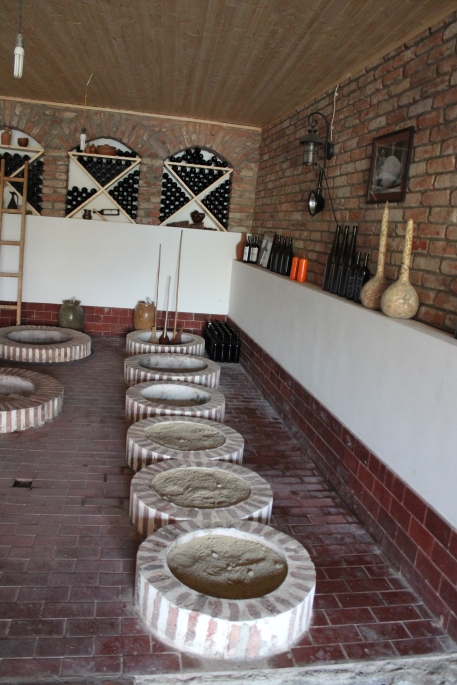 After our tour, we get a lesson in folding khinkali dumplings from Iago’s wife, herself a rare female winemaker, then sat down to eat them along with the other Georgian stand-bys of khachapuri, cucumber and tomato salad, eggplants with walnut sauce, and, of course, plenty of wine.

3 thoughts on “A Cooking Journey through Georgia: Iago’s Wine”