When chef Michael Landrum began offering a second menu inspired by flavors from across the former Soviet Union and the Silk Road inside his Arlington, VA restaurant Ray’s Hell Burger, he encountered some harsh criticism, but not from the usual sources. “I’ve had several Russian women of a certain generation tell me in the kindest, most genial ways that I have not, nor could I possibly ever, do anything right,” says Landrum with a bemused smile.

If you’re nostalgic for dishes you’ve eaten in Moscow, Tashkent, or Tbilisi and are hoping to recreate that experience at The Tasty Dug-Out (the name Landrum has given to his restaurant-within-a-restaurant), you’ll walk away disappointed. “This is food inspired by flavors I’ve enjoyed in that part of the world,” Landrum explains. The sub-head on the menu reads “Modern Zemblan Cuisine,” an homage to the imaginary setting of Nabokov’s 1962 novel Pale Fire (the title of which is itself a reference to a line of Shakespeare’s that is often interpreted as a metaphor for creativity and inspiration).

The “dug-out” refers to Landrum’s take on Ajaran khachapuri (the shape of which resembles a dug-out canoe). He offers a classic version (gussied up with browned butter infused with ground marigold petals and garnished with a dollop of spicy adjika pepper paste) and several add-ons, including steak tartare, wild mushrooms, smoked salmon and salmon caviar. In what I consider to be a stroke of genius, he recognized the affinity between Ajaran khachapuri (a bread bowl filled with molten cheese in which an egg is poached) with the Middle Eastern/North African dish shakshuka (eggs poached in a spicy sauce of tomatoes, peppers, and onions, often scooped up with bread). His addictive “katch-a-shookah” marries the two concepts, with a cheese-stuffed crust holding a caldera of cumin-scented tomato sauce, olives, marigold butter, and green harissa (Moroccan chili sauce).

“With burgers and steaks, if you just do what you’re supposed to do, they’re going to come out great,” says Landrum. “This menu is my opportunity to play around and be a little more creative.” In addition to khachapuri, the menu includes a few Mediterranean and Slavic snacks to start your meal, grilled meat entrees served with fries and salad, and a small selection of sweets to round things out.

The concept is certainly a departure for Landrum, whose other DC-area restaurants (Ray’s the Steaks in Arlington, VA; Ray’s the Classics in Silver Spring, MD; and two locations of Ray’s Hell Burger, one in DC and one in Arlington) feature more standard American fare, albeit with some unusual variations available. His ventures have earned wide popular acclaim, not to mention the presidential thumbs-up: President Obama and VP Joe Biden visited Ray’s Hell Burger in 2009 and Obama took Russia’s then-president Dmitri Medvedev there when Medvedev visited the US in 2010.

Another quirk of the Tasty Dug-Out’s menu is its wide-ranging tea selection, which takes pride of place at the top of the page before the alcohol. It may seem out of place to some on a menu dominated by savory dishes, but it evokes the spirit of the chaikhana, or Central Asian teahouse, where people go to let the cares of the day melt away as they sip tea, nibble snacks, catch up with friends, and maybe even indulge in a postprandial snooze. (Do try not to fall asleep in your chair at the restaurant, though.) The blooming teas are visually stunning: watch the flowers that scent the tea slowly open and “bloom” inside the glass teapot.

While you’re doing things a little differently, go ahead and save your vodka for dessert. My dining partner and I were particularly taken with the Cathead honeysuckle vodka from Mississippi, which goes down real smooth. We sipped it while devouring a slice of dense honey-sweetened cake, layered with cream and topped with berry jam.

The Tasty Dugout is open inside Ray’s Hell Burger (1650 Wilson, Blvd., Arlington, VA) from 5:30 pm to close on Tuesdays-Fridays and from noon to close on Saturdays and Sundays.

Bazaar Spices is the only shop in DC where you can find Georgian herbs and spices like blue fenugreek, adjika, and ground marigold. Join me there for a Georgian happy hour and cooking lesson on Thursday, May 12. I’ll show you how to make your own khinkali dumplings and prepare badrijani nigvzit (fried eggplant rolls with walnut-garlic filling). Enjoy a spread of Georgian appetizers, sip wines made from native grapes, listen to live folk music, and learn how to use Georgian herbs and spices to add depth and color to your own cooking, no matter what type of cuisine you’re making. You’ll take home a Georgian spice sampler and recipes to use them in your own kitchen.

Hope to see you there!

You’re invited to the Georgian Embassy on Wednesday, March 2 for an evening of Georgian food, wine (poured by yours truly), and conversation hosted by JDC Entwine, the young professionals arm of the prominent Jewish humanitarian organization. The guided part of the evening will focus on Jewish life in the Caucasus today, and I’ll talk about traditional Georgian winemaking and teach you a few phrases that may come in handy if you decide to go on the trip to Georgia that JDC Entwine is offering this summer (or just want to keep in your back pocket for future reference).

Iakhni is a specialty of the Ajara region—people from other parts of Georgia may not have heard of it. Its deep orange color comes from dried marigold, which was historically passed off as the much more expensive saffron and has since become one of the defining features of Georgian cuisine. A dish of the same name appears in various forms across South Asia and the Middle East. It’s likely this dish was brought to Georgia by the Ottomans.

In Ajara this dish is typically made with fatty brisket that is boiled until tender, but short ribs are easier to find in the US and come out beautifully when braised (cooked long and gently in nearly enough liquid to cover them).

Grape vines criss-cross Georgia like telephone wires. Cooks in other parts of the country often stuff them with a mixture of beef and pork, but an all-beef filling is more popular in the Ajara region bordering Turkey, where Ottoman influences run deep and many people consider themselves Muslims.

This simple yet satisfying soup promotes good digestion and is a popular way to start off a rich meal. Georgian yogurt (matsoni) tends to be tarter than the yogurt we find in American grocery stores, so I suggest adding a bit of sour cream to approximate that flavor. If you make your own yogurt, you can achieve that flavor without sour cream—just leave the yogurt to ferment a bit longer. This soup does not reheat well, so make only as much as you plan to eat right away. Serves 4.

I spent five months living in Batumi in Georgia’s southwestern Ajara region, so I’m particularly excited to be partnering with Ankara Restaurant and Georgian Wine House on a four-course dinner featuring regional dishes from Ajara paired with Georgian wines. The cuisine of this mountainous region is somewhat distinct from that of the rest of Georgia due in large part to its historical ties with Turkey and the Ottoman Empire. Ajara is known for its wide variety of dairy-based dishes, its citrus orchards, and its rocky Black Sea coastline. 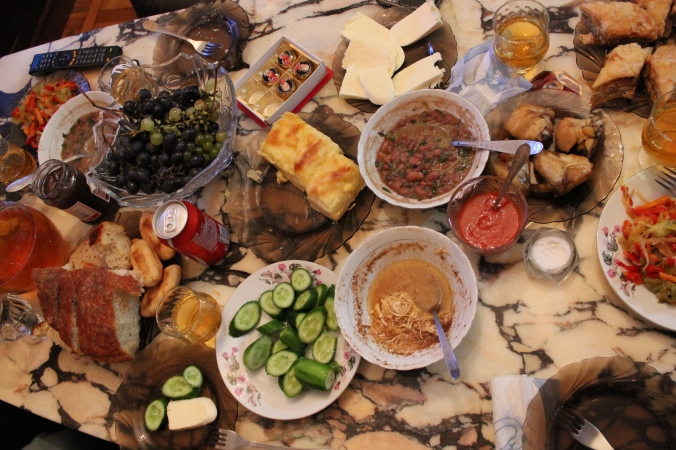 A homestyle Ajaran dinner with my Batumi host family in 2013

Ajarans share their Turkish neighbors’ love of stuffed grape leaves, yogurt soups and sauces, and baklava. Their cuisine also reflects the tart, herbal, and nutty Georgian flavor palate, so their cooking includes plenty of walnuts in both sweet and savory dishes, garlic, pomegranate, coriander, blue fenugreek, dried marigold, and mounds of cilantro and other herbs.

Come eat with friends and friendly strangers at an intimate wine dinner at Ankara in Washington, DC:

Seats are limited, so get your tickets early! This is an equal opportunity meal for vegetarians. 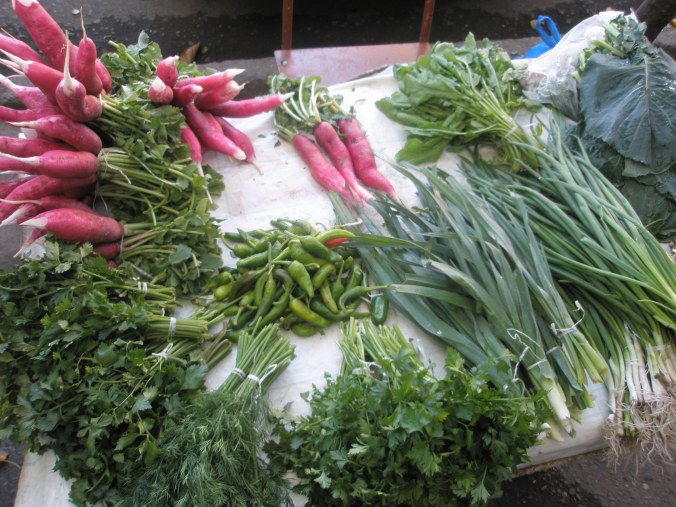 Vegetables on display for sale at a Batumi market

The Ajaran/Turkish Crossroads dinner is the first in a series of special dinners Ankara is planning to host over the coming months. The March dinner will feature regional dishes and wines rom northern and central Turkey, while the April dinner will see the restaurant transformed into a traditional Turkish meyhane, with roaming musicians and a meal composed of meze, salads and fish dishes paired with regional wines and raki, Turkey’s national anise-flavored spirit.

Georgian wines have been making their way onto wine lists at some of DC’s trendiest restaurants lately, but the wines themselves are anything but faddish. Georgia is home to the world’s oldest continuous winemaking tradition, stretching back more than 7,000 years. Its most talented vintners are making natural wines using native grapes and ancient fermentation methods that yield complex flavors you won’t find elsewhere. 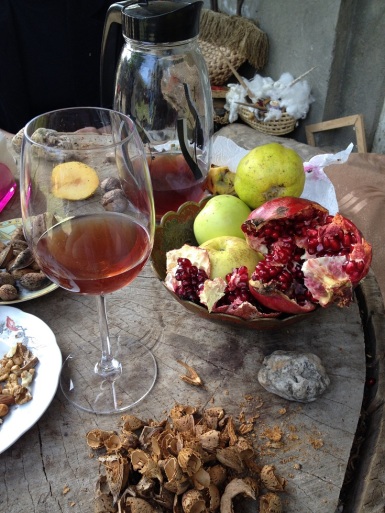 Join Wendy Stuart of Food Works Group and Jenny Holm of The Georgian Table for a guided tasting and discover the fascinating stories behind these one-of-a-kind wines.

THIS EVENT HAS SOLD OUT

PLEASE NOTE:  If you need to cancel your reservation, please notify us as far in advance as possible. We will happily provide a refund if we are able to fill your spot(s) with others.

Let’s cook, eat, and toast together in December! I’m offering a Georgian cooking class and wine dinner for 10 people at a private home in northwest DC. The event is now full, but submit your details below to put yourself on the waitlist. I will notify you via e-mail if a spot opens up. 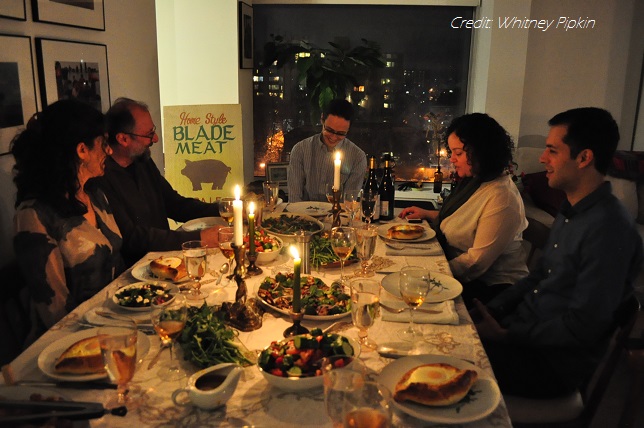 Thanks to Whitney Pipkin, who took this picture at a dinner I prepared along with Wendy Stuart of Food Works Group. The photo was also featured in the Washington Post (Mar. 3, 2015).

I’ll teach you how to make three classic Georgian dishes (including Ajaran khachapuri), then we’ll all sit down to devour the fruits of our labor (plus a few of my own) over Georgian wine and conversation. I’ll provide enough wine for approximately two glasses a person, but you’re welcome to bring a bottle of your own to share with the group if you like.

PLEASE NOTE: Your reservation is confirmed only once your payment has been processed. (I will notify you when this happens.) If you need to cancel your reservation, please notify me as far in advance as possible. I can only provide a refund if I am able to fill your spot(s) with others. This is purely to recoup my costs, as several seats for this event were donated through silent auctions to support Tbilisi flood relief efforts and educational exchange programs between the US and Georgia.

We had a great time cooking at YMCA Anthony Bowen last month. If you missed it last time around, sign up for my November class. We’ll make Ajaran khachapuri (a perfect stick-to-your-bones dish for fall and winter) and two other Georgian dishes. (Got favorites? I’m taking suggestions for another day or two!)

Monday, November 16, 7-9 pm
YMCA Anthony Bowen (1325 W St. NW, Washington, DC)
$30 for YMCA members, $40 for non-members
Register here
(Click the login link at the top right of the page and quickly create an account if you don’t already have one with the YMCA) 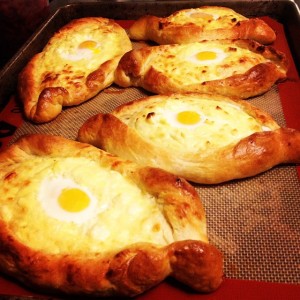